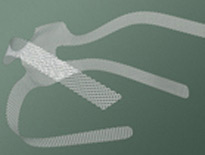 On July 13, 2011, the FDA issued a public advisory about synthetic polypropylene mesh which is commonly used during transvaginal surgeries to correct female gynecological problems such as pelvic organ prolapse (POP) and stress urinary incontinence (SUI). The surgical mesh is made from porous synthetic material and is permanently implanted in women transvaginally. It is estimated that physicians in the U.S. performed as many as 75,000 surgeries a year utilizing these mesh products. If you live in the Tampa area and have suffered a serious complication following mesh repair surgery, you should speak with the Tampa transvaginal mesh attorneys at Alley, Clark & Greiwe about your legal rights.

From 2008 to 2010, the FDA received more than 1,500 Adverse Event Reports related to complications associated with a synthetic vaginal mesh. The FDA’s 2011 advisory warning concluded that serious complications associated with surgical mesh for transvaginal repair of pelvic organ prolapse were “not rare” as had been previously reported. The FDA found that erosion of mesh through the vagina was the most common and consistently reported mesh-related complication from transvaginal POP surgeries using mesh. Additional adverse events included mesh contraction (shrinkage) which resulted in vaginal shortening, vaginal tightening, and vaginal pain in some women. Both mesh erosion and mesh contraction may lead to severe pelvic pain, painful sexual intercourse, or an inability to engage in sexual intercourse. Also, men may experience irritation and pain during sexual intercourse when the mesh is exposed after erosion. Vaginal mesh erosion can require multiple surgeries to repair and can be debilitating for some women. In some cases, even multiple surgeries will not resolve the complications.

The serious medical problems associated with vaginal mesh have not been associated with just one particular brand of mesh. If you are uncertain the type of mesh that was used during your surgery, you should contact your surgeon. Also, if you have any signs or symptoms of extreme pelvic pain, our transvaginal mesh attorneys in Tampa recommend that you should see your physician immediately for evaluation.

The top manufacturers of vaginal mesh include:

Mass torts are not the same as a “class action” which is a common misconception. In many instances, a mass tort is litigated in what is called multi-district litigation (MDL). This type of centralized litigation is not the same as a class action. Unlike a class action, individual lawsuits filed all across the United States remain stand-alone lawsuits, but they will be transferred to one jurisdiction and assigned to one federal court judge. Product liability cases are often good candidates for MDL because they involve a large number of people similarly injured by a particular product. The MDL process is a mechanism that allows the pretrial procedures of hundreds or even thousands of similar cases to be consolidated before a single judge, with the intention of avoiding inconsistent rulings, completing generic discovery and conserving the resources of the parties involved.

In the transvaginal mesh litigation, The Judicial Panel on Multi-District Litigation (JPMDL) chose the Honorable Judge Joseph R. Goodwin to preside over the MDLs for claims involving the following manufacturers: C.R. Bard, American Medical Systems, Boston Scientific, Ethicon Inc. (Johnson & Johnson), Coloplast Corporation and Cook Medical. These MDLs have been centralized in front of Judge Goodwin in the United States District Court, Southern District of West Virginia. Our firm is presently litigating a large number of claims for injured women before Judge Goodwin in the federal court proceedings in West Virginia.

Are You Planning Surgery with Transvaginal Mesh?

Thousands of women suffering pelvic organ prolapse are treated with synthetic mesh each year, but reports indicate surgery can often be performed safely and effectively without the need for a mesh. If you are considering this type of surgery in the near future, be certain to ask your doctor if mesh will be used during your surgery. Also, talk to your surgeon about all available treatment options, including surgical repair without mesh and non-surgical options.

Contact Our Tampa Transvaginal Mesh Attorneys for a Free Consultation

If you or a loved one have suffered a serious complication following mesh-repair surgery for pelvic organ prolapse or stress urinary incontinence, please contact the experienced transvaginal mesh attorneys at Alley, Clark & Greiwe in Tampa for a free consultation about your legal rights.