Since its release on May 11, 2001, Yasmin has been one of the most popular oral contraceptives with sales topping $570 million in 2007. Together, sales for Yasmin and Yaz (both manufactured by Bayer) totaled over $1.2 billion in 2008. With the overwhelming success in the sales of these products, it is no wonder that a generic versions named Ocella and Gianvi are now available.

This class of birth control pills differ from all other oral contraceptives because they contain drospirenone. Drospirenone causes elevated blood levels of potassium which may lead to serious health problems. In fact, Yasmin and Yaz have been under heavy scrutiny for possible links to serious side effects including gall bladder disease, stroke, pulmonary embolism, deep vein thrombosis (DVT), heart attack, and even death. Women with a history of cardiovascular, kidney, and liver problems should not use this medication. To date, these products have yet to be recalled by either the FDA or the drug manufacturers. 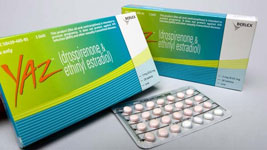 Soon after Yasmin was introduced in Europe in the year 2000, approximately 40 cases of venous thrombosis among women taking Yasmin were reported, although a direct link to Yasmin could not be established. In April of 2002, a medical study was published in the British Journal of Medicine that indicated the Dutch College of General Practitioners advised their own professional body against prescribing Yasmin due to the lack of epidemiological data on the risk of thrombosis from the new-generation birth control pill. Less than one year later, there was another study in the British Journal of Medicine in February of 2003 that provided further details about several cases involving serious blood clots in women using Yasmin.

In recent years, many product liability lawsuits have been filed in the United States on behalf of women who have developed serious medical problems after using Yasmin and Yaz. As of October 1, 2009, a panel of federal judges has ordered these lawsuits be consolidated under MDL 2100 in the United States District Court for the Southern District of Illinois. This type of consolidation is typical with mass tort claims involving common questions of fact and is intended to prevent duplication of discovery and promote efficiency in the litigation process. MDL 2100 will be presided over by Federal Judge David R. Herndon in the Southern District of Illinois.

If you or someone you love have developed a pulmonary embolism or deep vein thrombosis, stroke, or other serious medical complication while taking Yasmin, Yaz, Gianvi, or Ocella, please contact an experienced Tampa Yasmin Attorneys at Alley, Clark & Greiwe to learn more information about your legal rights.