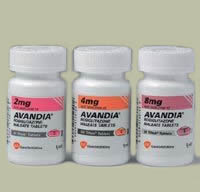 The popular drug Avandia (rosliglitazone) was approved for market in the U.S. in 1999 to help control blood sugar levels in patients with Type-2 diabetes, a condition that affects 18 to 20 million Americans.  In the last decade, Avandia has been prescribed to millions of diabetics across the country.  The drug has been linked in recent years with serious and potentially fatal side effects including significant increased risks of liver toxicity, liver failure, heart attacks, congestive heart failure, bone fractures, and vision loss from macular edema (swelling of the retina caused by fluid accumulation in the eye).  The risk of heart attack or heart-related deaths are greatest in patients with underlying heart disease or patients at high risk for heart attack.

On May 21, 2007, the FDA issued a Safety Alert regarding Avandia indicating a “potentially significant increase in the risk of heart attack and heart-related deaths in patients taking Avandia.”  In June of 2007, the New England Journal of Medicine published a very disturbing medical study which showed patients taking Avandia substantially increased their risk for serious heart problems and heart attacks by 43% and risk of death from heart disease by up to 64%.  Shortly thereafter, the FDA issued a “Black Box Warning” – the most serious warning –  in response to the Journal’s  report. However, the FDA did not require the drug be recalled nor did GlaxoSmithKline voluntarily recall the drug.

In October 2008, increased safety concerns prompted the American Diabetes Association (ADA) and the European Association for the Study of Diabetes to unanimously advise against using Avandia.  Subsequently, consumer advocacy group Public Citizen filed a petition with the FDA imploring the FDA to issue a recall of Avandia due to its serious and life threatening risks to patient safety.  Several experts who have advocated for a recall suggest that as many as 100,000 heart attacks could have been caused by Avandia since its approval in 1999.  There is also mounting evidence that GlaxoSmithKline knew about the safety risks of Avandia well before the information was released to consumers.

Most recently, in the July 22, 2009, edition of the peer-reviewed medical journal Pharmacoepidemiology and Drug Safety researchers identified eleven cases of severe liver toxicity and deaths that were linked to the popular Type 2 diabetes drug Avandia.  These cases were identified after review of Adverse Event Reports spontaneously submitted to the FDA between 1997 through 2006.  However, many believe that the number of cases identified in the study only represent a small fraction of actual liver failure events due to low reporting submissions to the FDA.

Despite pressure and scientific data published to date, the FDA has not issued a recall of this dangerous medication and Avandia remains on the market.  Approximately three million prescriptions were written for Avandia in 2008, sharply down from a high of 13.2 million prescriptions in 2006 (generating at least $2.2 billion in sales) amidst mounting safety concerns.

If you or a loved one has taken Avandia and suffered liver toxicity, liver failure, heart attacks, congestive heart failure, or death, please contact Alley, Clark & Greiwe for important information regarding your legal rights.